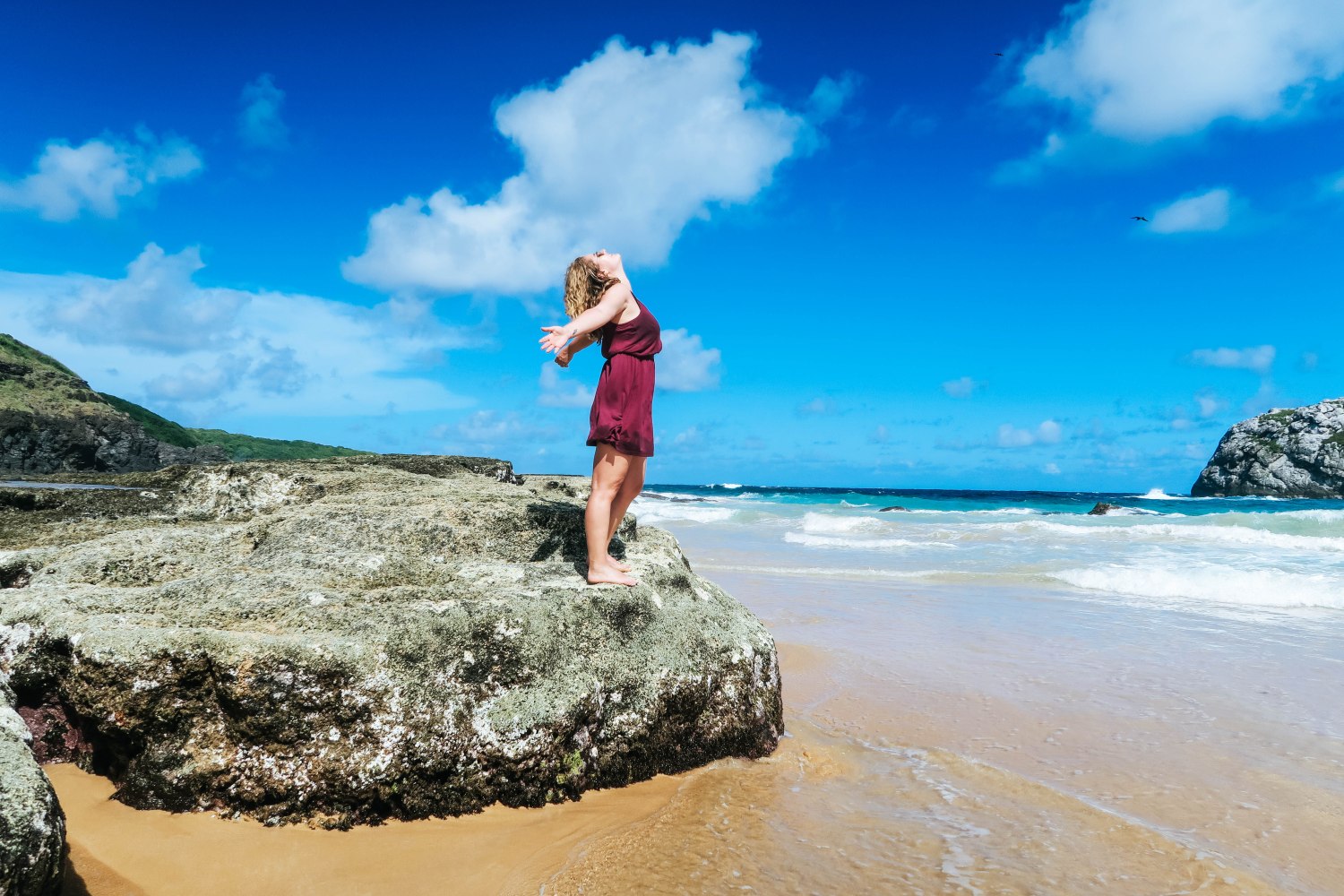 As a Non-Brazilian resident the easiest way to pay the fees is by doing so at the airport after you land. Visiting Fernando de Noronha is N O T cheap. You pay about 60R$ per person per day to stay and since 2012 there is a national park fee as well which is about 180R$ valid for 10 days.

∇ About the island

220 miles (350km) off the coast of South America a seven-square-mile (17km2) small island called Fernando de Noronha exists. Most people have not heard of this treasure before Praia do Sancho was rated as one of the most beautiful beaches of the world. Very few tourists are visiting Fernando de Noronha, except for the Brazilians who love to spend their vacation on the island. 420 tourists max are allowed on the island, which makes it hard to not feel special, right? Only 3’000 people live permanently on the island, most of them in a village called Vila dos Remédios.

What I did not expect was that locals speak very little to no English at all. I visited the island with my two friends who speak Italian and Spanish, however this did not help too much. Make sure you do some research beforehand and write down important Portuguese vocabulary. 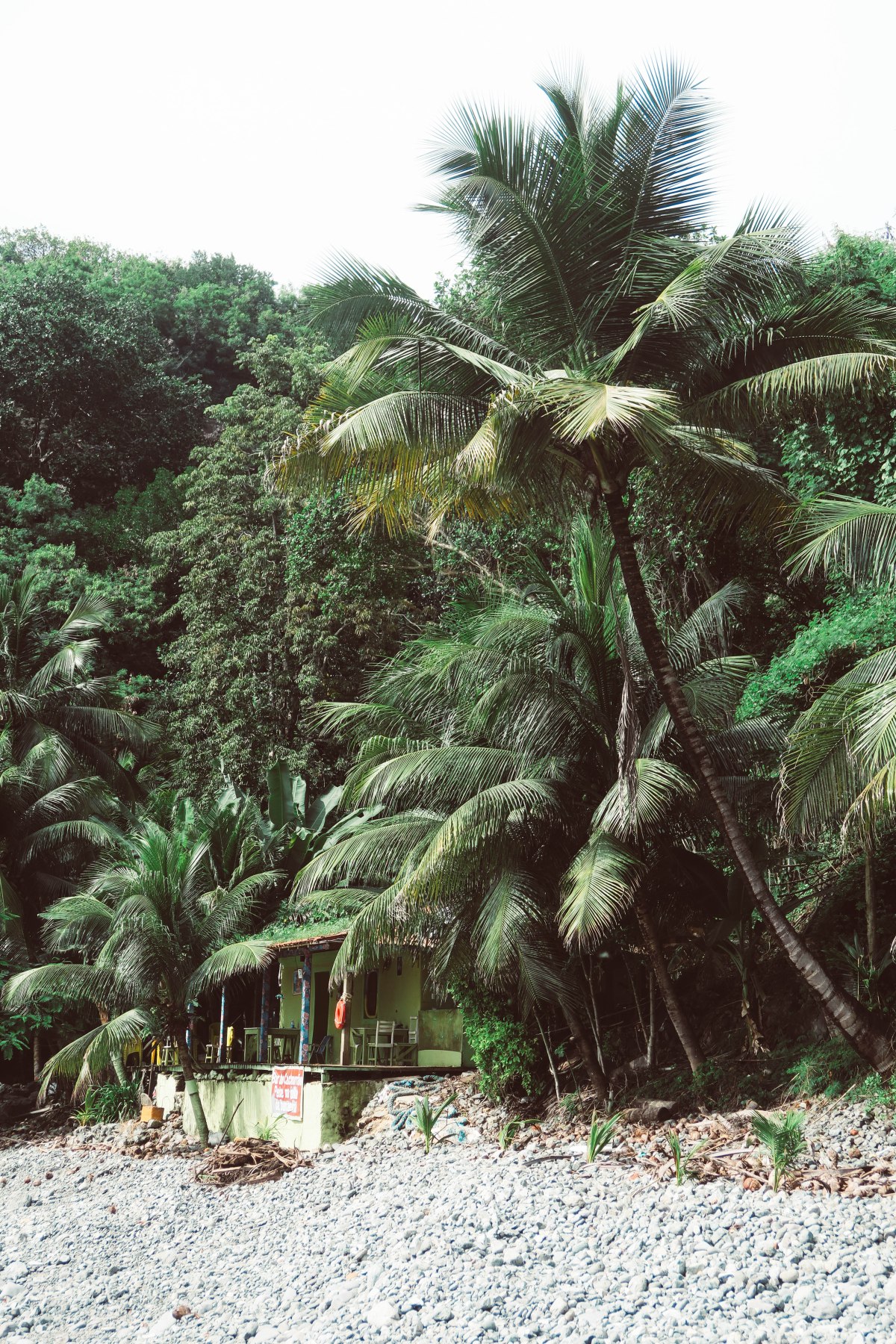 There are plenty of Pousadas to stay at but we decided to rent out an “apartment” from a private person. Quotation marks because it was more of a wood shed. George, the host, is a crazy but lovely guy, originally from Ireland. He has great life experience, which is why we spent most of our evenings at home with a beer in one hand and mosquito repellent in the other, listening to his awesome adventurous stories (which he said are all very true and had happen to him). I recommend staying near Vila dos Remédios, as this is where to most restaurants are located. Which leads us to the next topic: Food.

∇ How to get around

I highly recommend renting a dune buggy (200R$/day) right away when you arrive. It’s the best way to get around the island, which is why 75% use this transportation vehicle. Having driven one myself for 3 days I can now say that learning how to drive a tractor at my dad’s farm when I was a teenager definitely paid out. Most buggies are old and I had a hard time getting in the gears and the breaks where just awful. It was still fun though and we giggled every time we hit a bump with almost full speed because I forgot to put my full body weight into pushing the brakes. The official speed bumps are on the one main road, but the rest of the streets are bumpy as well as it’s just dirt roads with huge holes and stones. I am not complaining though because these roads are the ones leading to the most beautiful beaches and secluded spots.

You could also make us of the public transportation (Bus 5R$), which is the cheapest option. However, you’d have to take into account that it involves a lot more walking to those nice and quiet places, as the bus only runs from one end of the island to the other.

We went to Vila dos Remédios every day to get breakfast and dinner (skipping lunch as it was too hot to eat). Be smarter than we were and check those opening hours! I almost starved one time when nothing opened for another 3 hours. In addition, there are very few shops where you can get groceries #smallislandlife.

Fernando de Noronha basically is one big beach. For real though, the island has a lot to offer when it comes to soft sand meeting turquois water. Which is why it’s best you explore them for yourself and choose your favorite one. Mine are: Praia do Conceição, Praia do Meio, Praia do Cachorro (with a natural pool where you can also cliff jump into), Cacimba do Padre, Baia do Sancho, Praia do Sueste and my top secret tip: Praia do Leão.

There’s a new post featuring some of the mentioned beaches coming soon so stay tuned!